Piracy rate statistics of our games in October 2012

As we tweet (or here) from time to time, our games are being stolen and uploaded to hundreds of warez sites and forums all over the web. What are the numbers?

Statistics for our DeathMetal HD

Our DeathMetal HD was released to Play Store for Android on 6th October and to App Store for iOS on 20th October. Our total sales numbers so far (from 24th October) are:

But at the same time the game was played by at least 32 000 users (unique IPs, not included players who play offline), and this number is still growing fast, currently at rate of 2 illegal downloads per one second! Here you can see this number of total unique players of our game in realtime (feel free to refresh the page):

On Android warez users are from all over the world, on iOS they are mostly from China so far. Total piracy rates on both platforms seems the same though, over 98%: 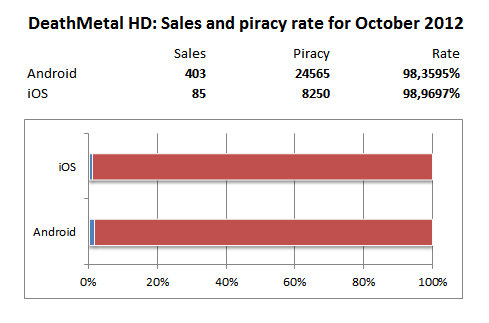 Maybe if we ever get so lucky and sale our games in tens of thousands of copies :), this rate would change significantly (we will keep you posted in that case), but this is how it looks now.

This is something every developer for mobile platforms is dealing with and there is not much one can do. Existing licensing protections are either ineffective or bothering regular customers who invested their money in your product. For example latest Licensing Service by Google which is recommended for Play Store apps can be removed from APK package using single line of code! iOS can be jailbroken (and approx 25% of iPhones, iPods and iPads are, but most of them just for purpose to customize the device or apps beyond limitations of locked iOS, not to steal apps). Licensing services often require you to connect to internet or reinstall the app, which is quite an issue if you are travelling, letting your kids play the games with networks off etc.

Improving copy protection or focusing on paying customers instead?

In our opinion better license protection would not generate higher income for the developer. Users who are OK with warez would just move to another title which can be stolen more easily and nothing will force them to pay just for your app (unless your app is a must-have of course :)). So instead we try to focus on paying customers, listen to their comments and tips, and update our products for them so they can feel they get good value for the money. And that they hopefully remember us and will try our new products as they come as well :).

Additional costs due to piracy

So mobile developers have to take the piracy as a fact and take into consideration additional costs it might bring. For example if you are planning to implement server-based multiplayer or big online score charts, this is something to be taken into account. If you sell the game to 1 000 customers, there might be already 50 000 other users who got it from warez sites contacting your servers as well.

We are alredy dealing with this issue in our DeathMetal (as we keep best scores online on our server for each of the 4 episodes), and it will become a bigger issue in our upcoming DarkHunt, where we implement bigger TOP charts with user nicks, level progress etc.

Had no idea our game is not free? Make it right! 🙂

If you got our games from some sites or forums stating that the game is free and you want to make things right (receive our gratitude and all future updates), please proceed with download from Play Store or App Store below. If you are unable to pay from your country on these stores, contact us on e-mail info@playito.com and we will find a way. Thank you and hope you will enjoy our games!

One Response so far.